Tane and I spent the May bank holiday in Krakow, Poland. Krakow is a fabulous place, and while there we took the time to visit what is probably the most horrific yet fascinating place I have ever visited, Auschwitz concentration camp. 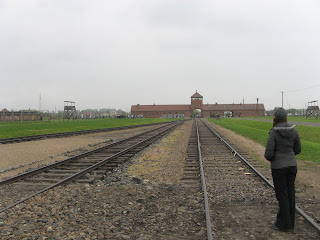 Standing on the spot where the trains were unloaded at Birkenau

When I was 18, I met an Auschwitz survivor. I was on a boat from Capri to Naples, and being the Coca-Cola fiend that I still am today, struck up a conversation with the man sitting opposite me about the strange writing on his Coke label. Turns out it was Hebrew, the man had been living in Israel since the war, and was a Holocaust survivor. We ended up having a long conversation about his experiences - how he was at Auschwitz for 6 weeks then moved to another camp, how his mother and sister were gassed and he was saved by a man telling him to lie about his age, and how while he grew up in Czechoslovakia he had no desire to go back. I asked him if he had numbers tattooed on his arm, but he didn't. 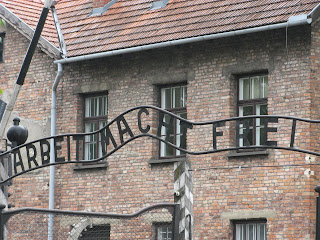 Eventually, we were joined at our table by three of his travelling companions. They had a conversation in Hebrew, and then all four turned to me. "Our friend here says your interested in the holocaust and asked to see his tattoo" one of them, a women, said. When I confirmed that yes I was and yes I did, she nodded and rolled up her sleeve. The other two people that had just joined us did the same, and I was confronted with three people's forearms that were tattooed with the little dark blue numbers that most people who survived Auschwitz were given. It was an intense experience to say the least. Everyone knows that Auschwitz existed and that bad things happened there, but to actually be faced with the physical evidence in the form of three people's tattoos makes it all very real in a way that is quite upsetting to say the least. Almost ten years later, visiting Auschwitz itself felt much the same way. 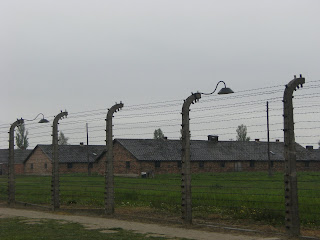 What most people talk about as being Auschwitz was actually three camps, Auschwitz I, Auschwitz-Birkenau and Monowitz. We visited Auschwitz One along with about another mazillion people on tour groups, and while some of the things we saw there were very emotional, in many ways there were so many people around that it was hard to take it all in. Having said that, though, seeing piles of shoes, prosthetic limbs and glasses was very affecting. Not to mention, of course, the gas chamber and crematorium that still stand there. 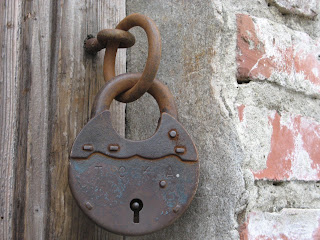 The lock on the gas chamber door

If you are ever visiting Auschwitz, though, I cannot recommend enough that you do not take a tour and spend a decent amount of time at Auschwitz-Birkenau as well as Auschwitz One. Birkenau was the main camp, and while it is not as user friendly as the other camp and just over 3 km away, it was here that most people mean when they talk about Auschwitz. Tane and I spent a couple of hours wandering alone around Birkenau's grounds (for some reason most tours don't seem to come to this camp except to look at the watchtower by the main gate), which was a very haunting experience. 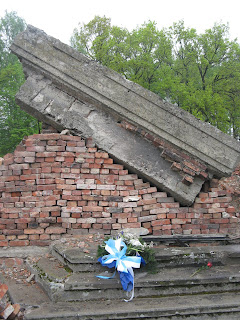 A destroyed gas chamber/Crematorium
The first thing that hits you about the camp is its sheer size - we spent about two hours there and only managed to walk around some of Birkenau. Most of the huts are gone and the gas chambers and crematoria were destroyed at the end of the war, but the remaining ruins somehow make the camp all the more haunting. One especially memorable thing that we did was walk the same route as the people that were unloaded from the trains and taken straight to the chambers, all the while very aware of never being terribly far from a watchtower or a barbed wire fence. 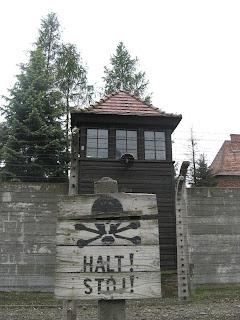 The one moment that Tane and I decided that resonated the most strongly with us, however, was when we were walking over a patch of grass behind one of the destroyed chambers. There were three very yucky photographs displayed of a group of people (I won't go into detail here) which made us shudder, even more so when we looked at the photos closely and realised that we were standing on the exact spot where the photographs were taken. There were a few of these photographs displayed around the camp, and each time I saw one it felt a little like seeing those tattooed numbers all over again. 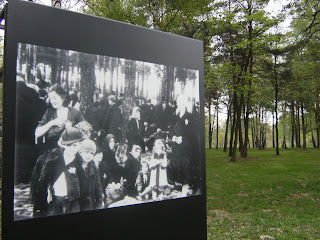 Have you been to Auschwitz or anywhere similar? If so, I am interested in your impressions. 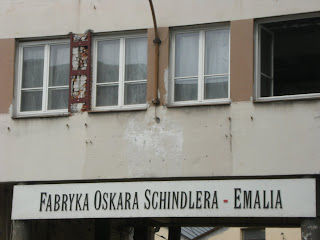 Schindler's Factory in Krakow, which we visited this morning as well as seeing lots of other scenes from the movie Schindler's List.

I've been to a few of these horror sites in Europe and Cambodia, and one thing that strikes me is how people like the Nazis, the Khmer Rougue, or those behind the Rwandan genocide think their race or ideology makes them superior to those they are murdering. In reality, it's the opposite.

I think empathy is the most important of all human traits. The less you have, the less of a person you are. So, if you could cooly send children into a gas chamber or pour acid down a man's throat, what does that make you?

I went there summer 2006 and there were three poignant things for me; firstly, the piles of baby clothes, secondly the sheer size of Auschwitz-Birkenau, and thirdly the ash pits with the signs saying “here lays aprox 1.5 mil people”.

It’s the sheer size and scale of the operation which makes it hard to comprehend; there just isn’t any relativity, there’s no reference point in our lives which we can relate to and therefore understand fully. We’ve all seen a grave before, but to jump from the spot where the remains of an individual rest to a single ash-pit where the remains of 1.5 mil were dumped is mind blowing. From memory there are two or three of those ash-pits which is a whole other level mind blowing.

I remember from university I wrote a few papers on a book called “Night” by Elie Wiesal who is a survivor of these particular camps, and with his writing in mind it made for a particularly chilling visit.

And then I had a dodgy kebab on the way home from the nearby town and had food poisoning for two days, this just added to the grim memories I have of the place.

I went to Krakow on a school trip in 1994 and got to visit Auschwitz and Birkenau. I think we only did the tour though, because I remember not being as affected as I'd expected, because of all the people around. Still, it was a powerful experience.

And I remember you meeting those people in 1998 - I was there! :-D Remember the "And We Didn't Even Know Their Names" idea it spurred?

Just like on the image "lock on gas chambers door", all the "gas chambers" have wooden doors...

Ehhh...?
Would you stand on this of a wooden door if I let some homocidal gas out on the other side of the door?
You have been so screewed by war propaganda.
The germans was about to make A-bombs and space rockets. Don´t you think they could construct a gas chamber?
Whatever you saw - THAT was not a gas chamber?
If you belive that, you must be very stupid...