It's a hard life on the road

Warning - this entry contains a number of photos that may make you wish you were here. Lauren and Tane take no responsibility for any jealousy that may occur. 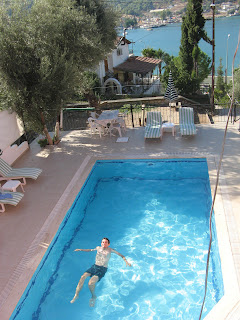 Fethiye is, frankly, fabulous. In many ways it is the Luang Prabang of Turkey. With pine-covered mountains meeting the deep blue Meditteranean, the scenery is spectacular. The atmosphere is relaxed, there are heaps of activities and sites to see nearby, and plenty of tourist infrastructure without a suffocating number of tourists. Fortunately, most of the British package tour types are in a nearby town filled with hotels with names like The Sun Trap and restaurants that quote prices in pounds.

We have spend three great days here. The first day featured a cruise around various islands and harbours. The highlights were: 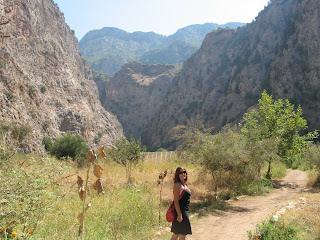 Butterfly Valley. Unlike one young woman, Lauren did not attempt to clamber up the rock-filled path in heels and a bikini. 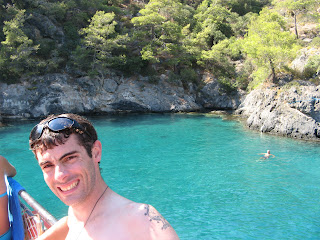 A cove with hot and cold springs feeding into the sea right next to each other. Swimming there was amazing - one moment you were chilly, the next warm.

Day two was our Birds Without Wings day. We went to the inspiration for the novel, the ghost town of Kayakoy, which was largely abandoned after the Turkish Greeks were sent away following the Greek-Turkish war in the 1920s. It was a melancholy place, though we were glad to see that some people (including a woman form Noo Yoick and some random camels) still lived there. We are big fans of the book, and it was touching to hear that one of the characters in it is based on a 112 year old woman who lives nearby. She is still keeping a box her friend Maria left her when Maria was forced to go to Cyprus. Maria has never returned, but the ancient woman has never opened the box. 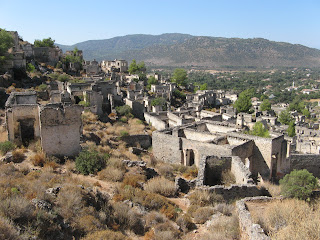 From Kayakoy we gave our rather untoned legs a bit of torture by walking over some hills to the beautiful Oludinez Lagoon. The view was totally worth it. 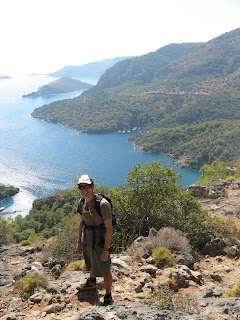 On the way we discovered that the track was only marked by irregular yellow and red stripes painted onto rocks, and that often it looked exactly the same as the rest of the stony, scrub-covered ground. Spoilt by as we Kiwis are by clear paths Department of Conservation signs listing how long it is to walk somewhere, we had to stop a few times and have a debate where to go. However, as we were descending the last hill we started following a couple in front of us - who turned out to have lost the track. So we ended up taking a bit of a short cut. 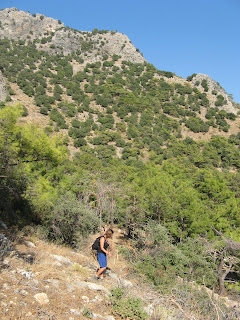 Driven by the prospect of a Diet Coke by a lagoon, Lauren wades through leg-slicing bushes and ankle-twisting rocks.

Today was the jaw-dropping Saklikent Gorge, which is a largely dry canyon that has a bottom made of smooth, milky stone. It is so narrow it feels like a marble alleyway.

Parts of it are so tight it basically becomes a cave. We walked into it for about 45 minutes, before it got blocked by boulders and it looked like we might have to do more climbing than we could be bothered with. 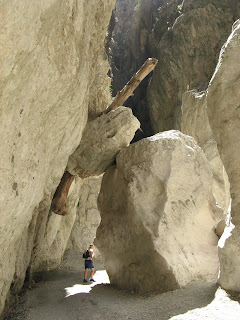 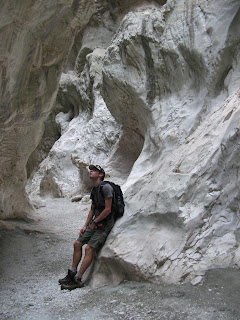 The Gorge is also notable for the river that tumbeles out of its entrance. You have to cross it to get further in. It was great to lounge around next to on a hot day, but wading up to our thighs became physically painful. To paraphrase Outkast, what's cooler than being cool? Saklikent Gorge's river, that's what.

Labels: Travel in the Middle East

wow you guys - those are some SPECTACULAR pictures! WE sure are jealous!!

ordinarily, I would be jealous. But today, the wind has died down, the sun is shining, my new house is sunny, the cat is well settled in, I'm in love with the father of my baby, and my baby, well, he's awesome. P'raps one day the three of us will follow in your well helled footsteps.

I mean, heeled. Not helled. Hee.