Lily at one, Amotai at three

A strange thing just occurred to me. Spring will never be what it was.

Of course the arrival of the season has always been nice: blossoms, daffodils, ducklings, the return of warmth and sunny evenings. It's not quite as dramatic as it is in the UK because we have so many evergreens and the winter isn't so grim, but it's still an uplifting time. But now, for us it is even nicer because both of our children were born in the early Spring. A beautiful day at this time of year will always remind me of the day we took Amotai home and took him out on the deck to get his first sunshine (a couple of days before we should have, which might explain his olive complexion), or of light streaming through the windows of the lounge while Lily lay in her basket. 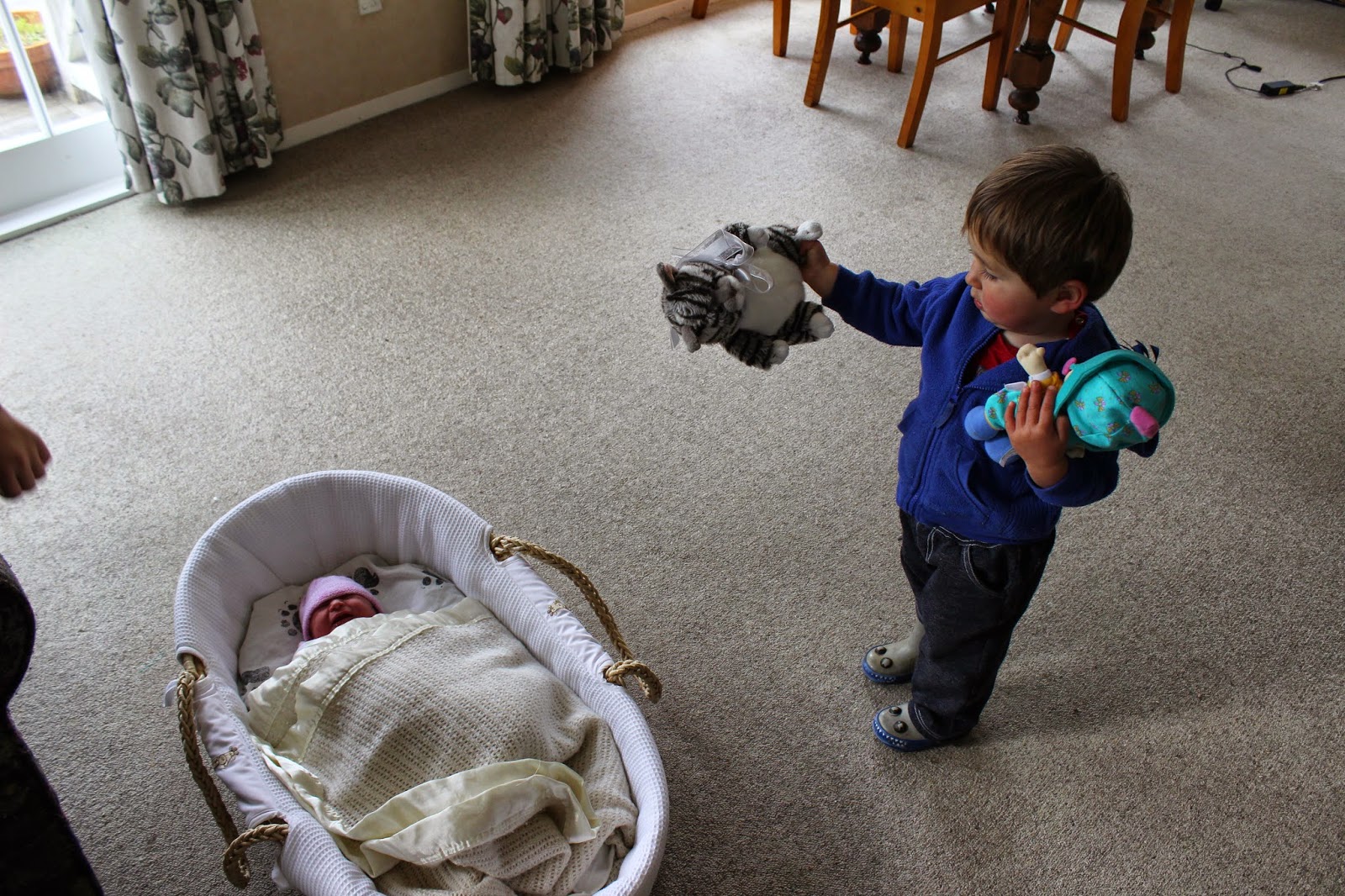 Both of our children had their birthdays in the last month, Lily's first and Amotai's third. We had a horrendous run of illnesses in early September, with Lily picking up hand, foot and mouth at creche, then passing it on to Amotai, who scratched his sores and picked up a virulent bacterial infection. Then, when Lily was finally well enough to return to creche she got rotavirus. A vomiting baby with spots, a runny nose and explosive diahorrea is not one of my top parenting experiences.

Thankfully they were through this by the time their birthdays came around, so we had some lovely times with them and with family who traveled a long way to visit us.

So now Lily is one, and not really a baby anymore. And Amotai is three. As he would say "I'm not a little boy, I'm a big boy!" This is a snapshot of our children.

Lily
The most physically remarkable things about Lily have always been her mop of hair and bright blue eyes. First thing in the morning her head looks like a haystack with sapphires hidden inside. 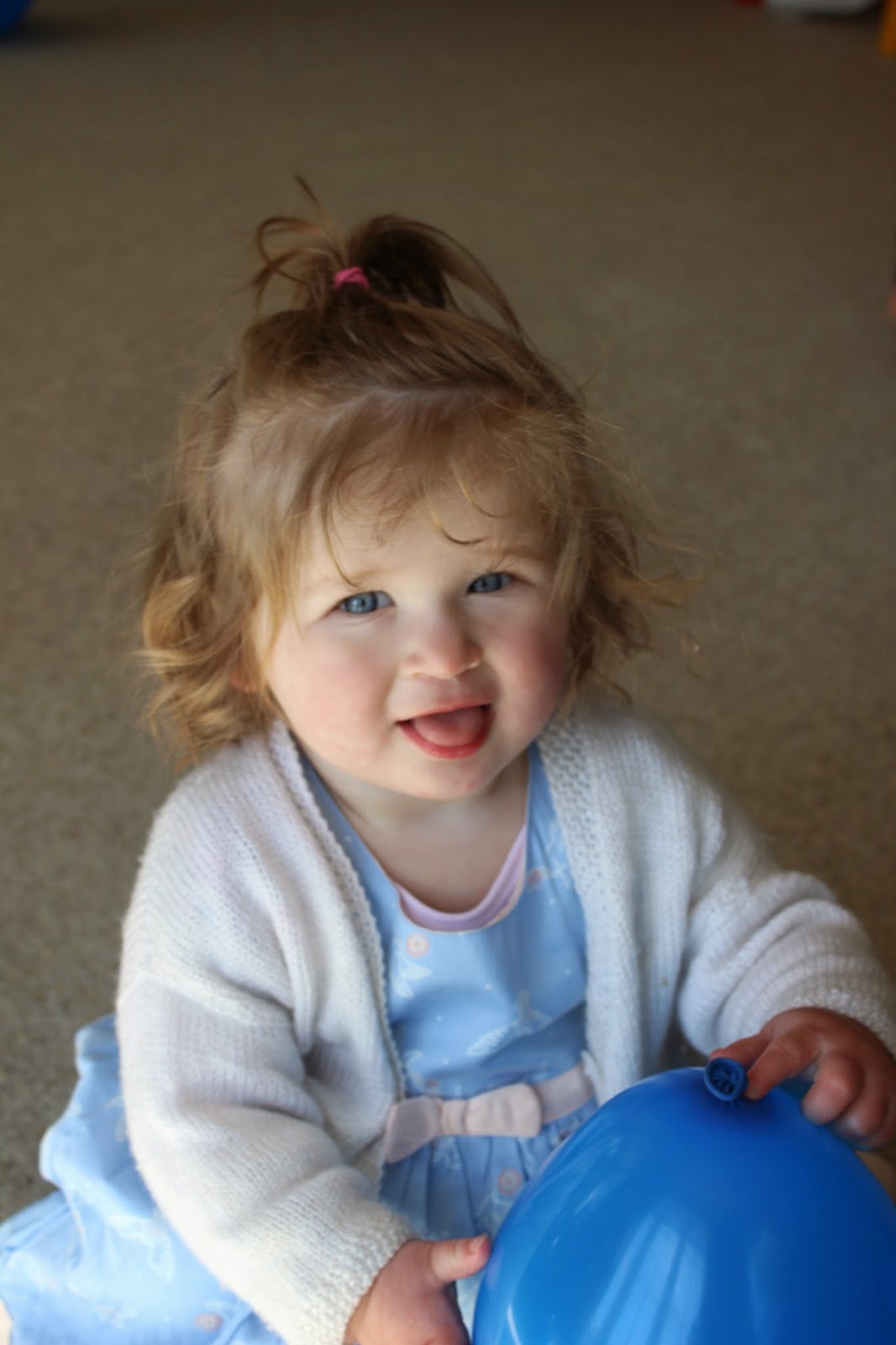 She's a feisty little thing, quite independent compared to Amotai and with a mean angry face (usually when something is taken from her, which unfortunately her brother does a lot). She's very keen to explore - particularly now she's walking. The speed that she's picked it up is amazing - it seems like in the last week she's gone from 80% crawling to 80% walking. She's even able to walk carrying things now, particularly her newfound favourite toy, Grumpy Cat.

Lily's other likes? There's singing Twinkle Twinkle Little Star, which is something she picked up from creche (at least there was something aside from illness). There's books too, which she's recently become really interested in. Initially it was the touch and feel ones like the That's not my... series, now it's others like the charming Toddle Waddle and classic Brown Bear and sequel Baby Bear.

It's nice to say that she also likes it when Dad comes home. I usually get a grin, a crawl or toddle over to me and "Dadadadadadad".

Amotai
Amotai often gets complimented on what a good boy he is, and he is, but recently he has belatedly entered the terrible twos or, given his age, become a 'threenager'. That means he often gets stroppy as he tries asserting control of his world - he's very particular about certain things, such as how sandwiches are cut or which parent does what, and will very firmly let you know what he doesn't want. 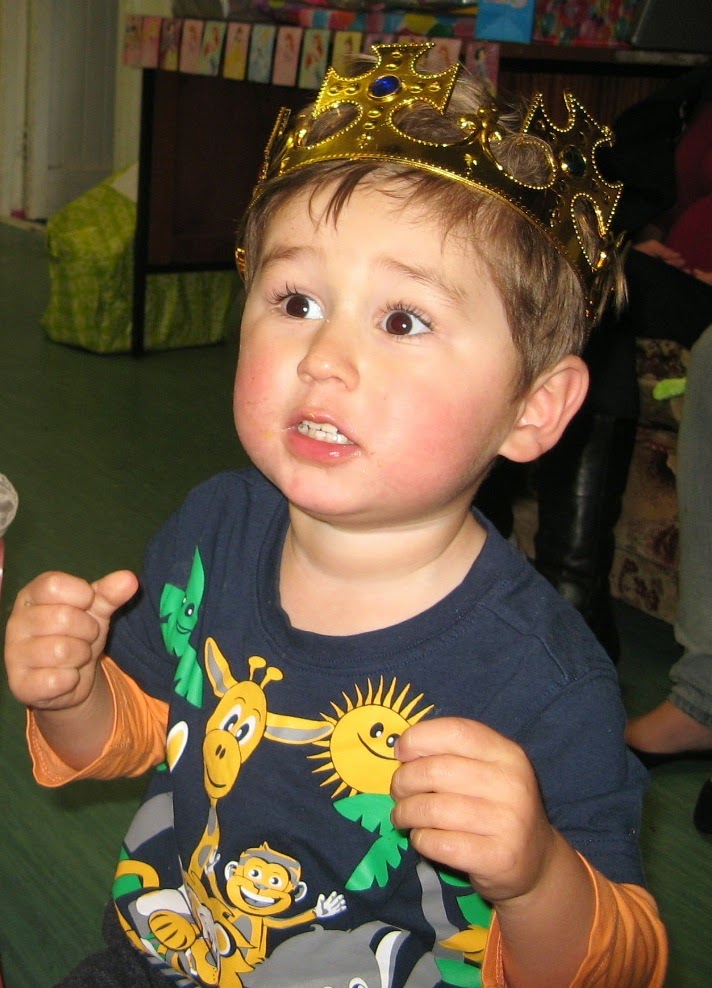 Grumpiness is the exception to the rule though. He's a sweet boy who loves cuddles, almost always summoning me to give him one in bed during the night, books, playgrounds, Peppa Pig, the Wiggles and going to sleep with soft toys Pinky (my old elephant), Bluey (his new elephant) and Babydoll.

Most of all he loves things with wheels, a fascination he's had since he was a baby and I used to take him to watch the traffic on the road outside. He loves riding his bike (particularly if I'm riding the dump truck behind him) and lining up his cars - like his Dad he finds it satisfying putting things in order. 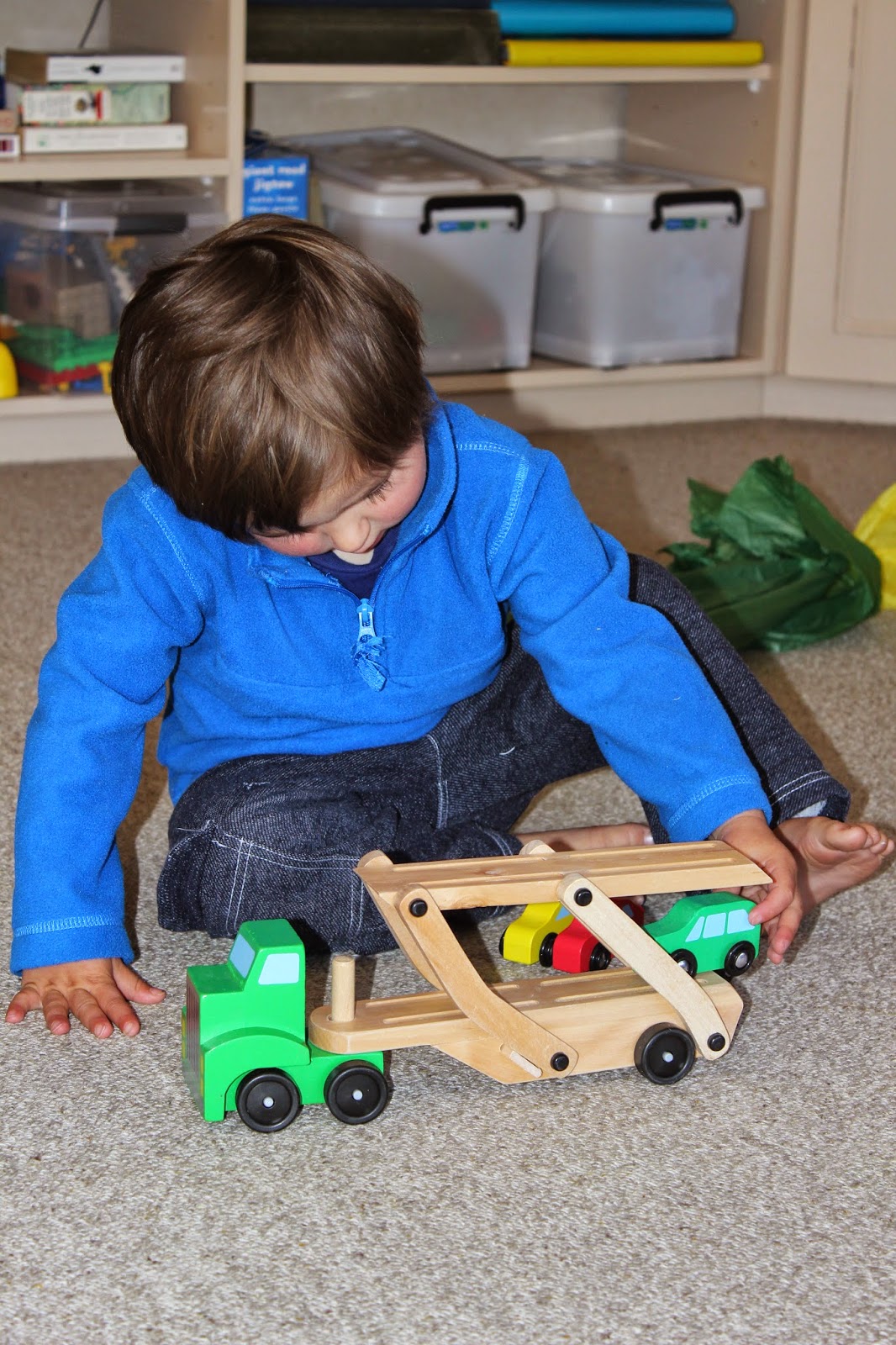 Also like his Dad, I think he's a slight introvert - though he does have some good friends in Cooper, Scarlet and particularly Cassandra, who's been his best mate since they were one.

They're two different people, our kids, but they like each other and we love them. Looking forward to many, many Springs to come! 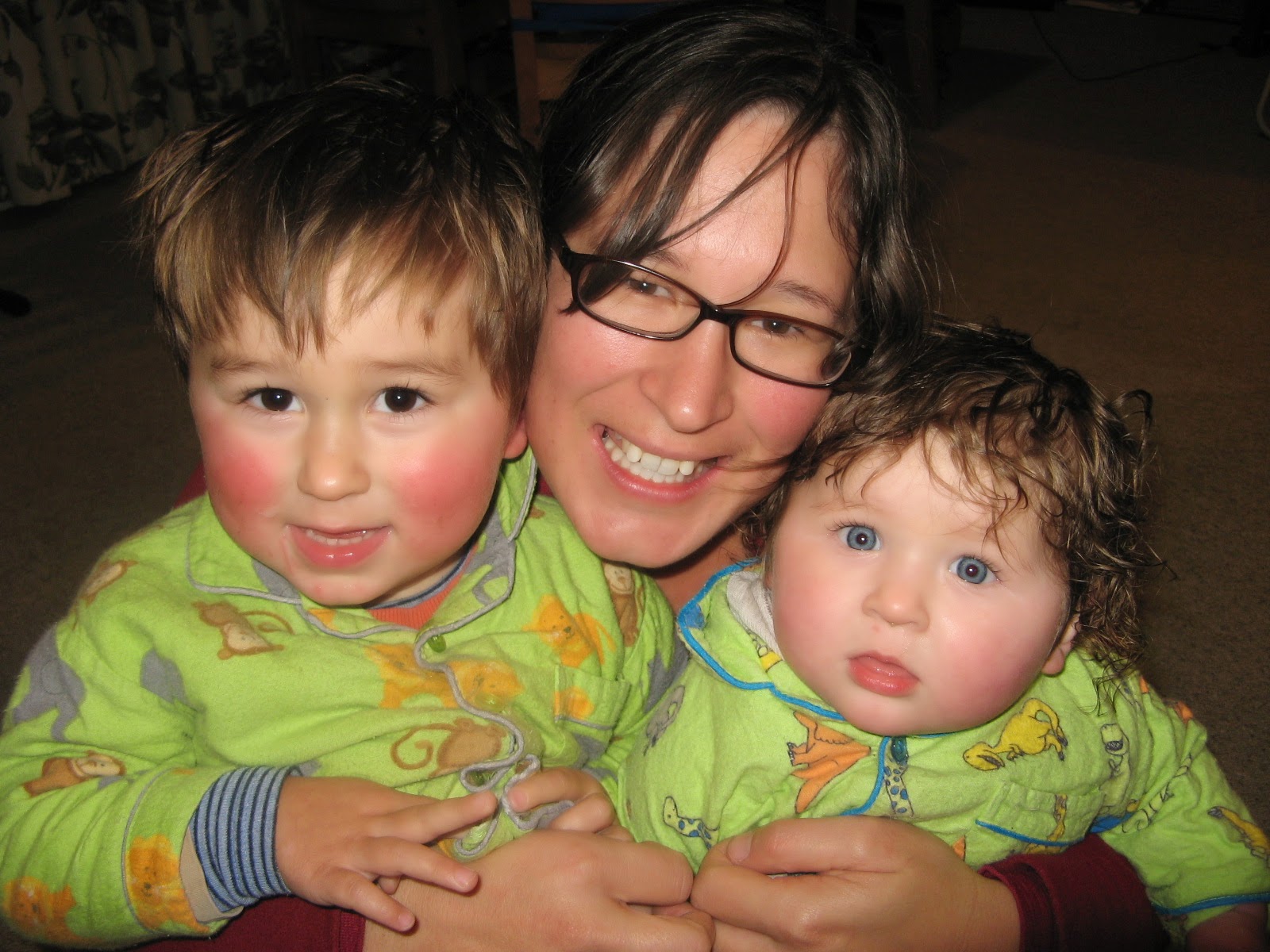 Labels: Amotai, It's all about whanau, Lily

At long last, a travel entry! Boy, Lauren and I have been craving an overseas trip and our six days in Samoa really hit the spot. The timing was particularly good as we were starting to feel the gloom of winter closing in around us and I'd be really busy at work.

Despite rave reviews from friends, we were a bit dubious about how the break in Samoa would be. We stayed at Aggie's Grey's Resort, which was our first time doing a resort holiday. It was also our first overseas holiday with two kids, both of whom are very young. Would the humidity turn them into little balls of grumpiness?

So, was it a dull, stressful, hot, waste of money? Thankfully no. It was great! 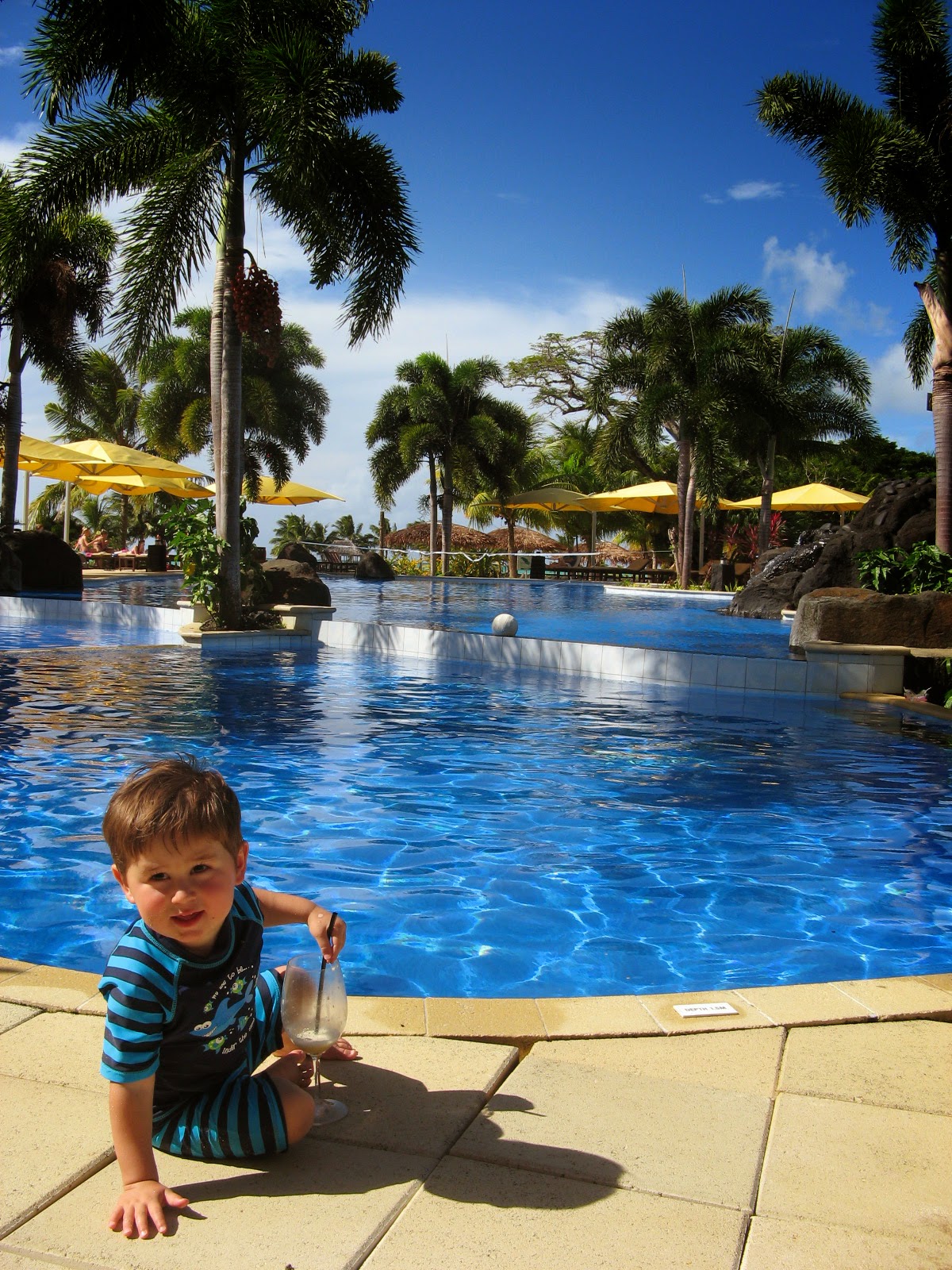 People travel for a few different reasons, such as partying, adventures or relaxation. Two little kids means we don't do any of the first two any more and, while we were hoping for some of the latter, we knew that after more than a day of chilling out on a beach and/or a pool we'd be bored. We primarily travel for the exotic, the feeling of being somewhere different.

With that in mind I think we, like many in New Zealand, saw the Pacific Islands (or at least the ones on the tourist radar) as a bit tame. Beautiful beaches, but if you want exotic, you go further afield, say to South-East Asia.

Well, we were wrong. Samoa really, really feels like being in a different part of the world. Pigs, dogs, chickens and shirtless children wandering across the main road. Lizards climbing on walls, a rhinocerous beetle outside the door. Palms overlooking fales, the traditional houses that are everywhere. 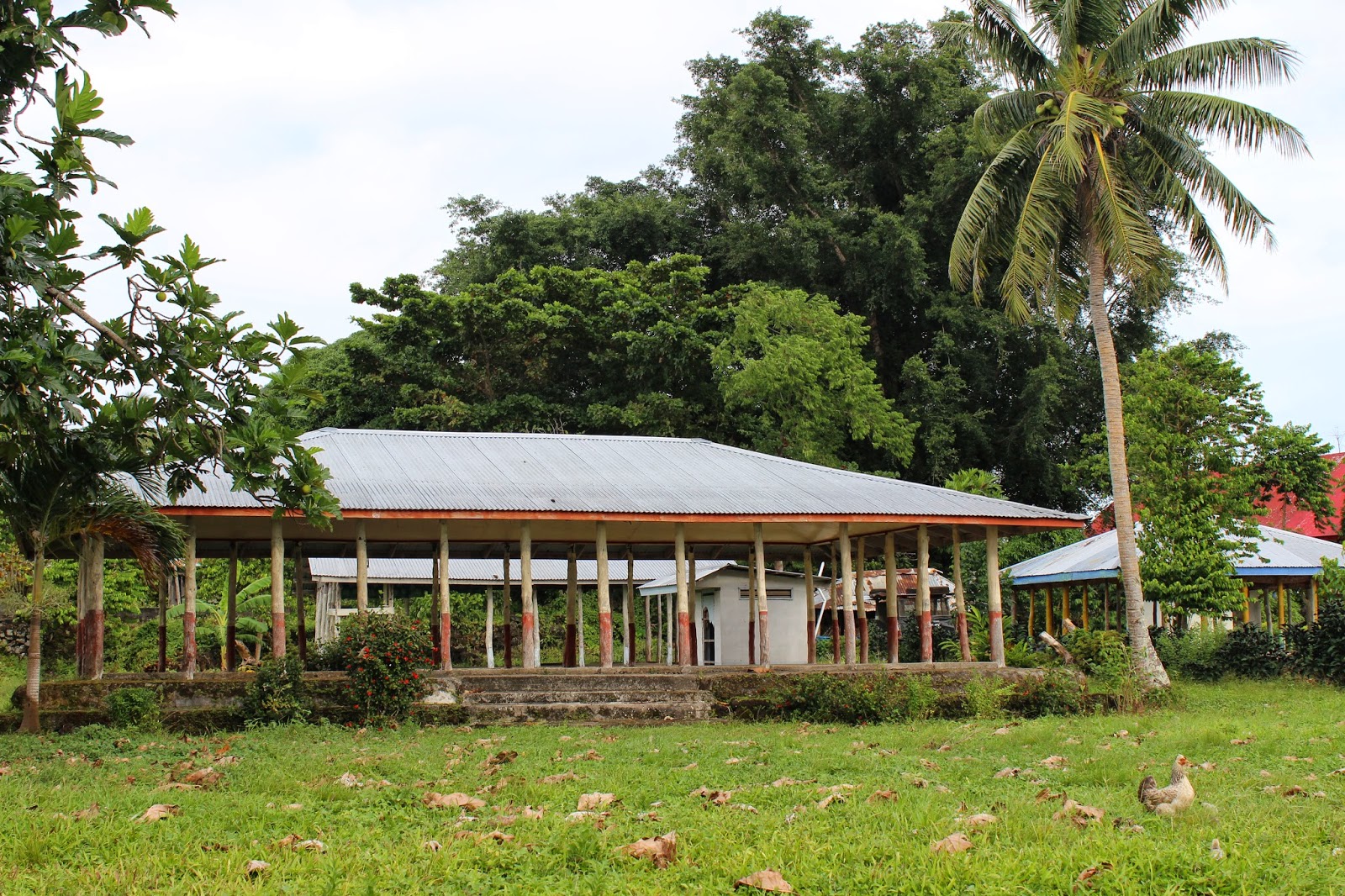 And the churches. Almost every village has one that is fancier than almost every church in New Zealand. Though I note that shortly after driving past the church below ... 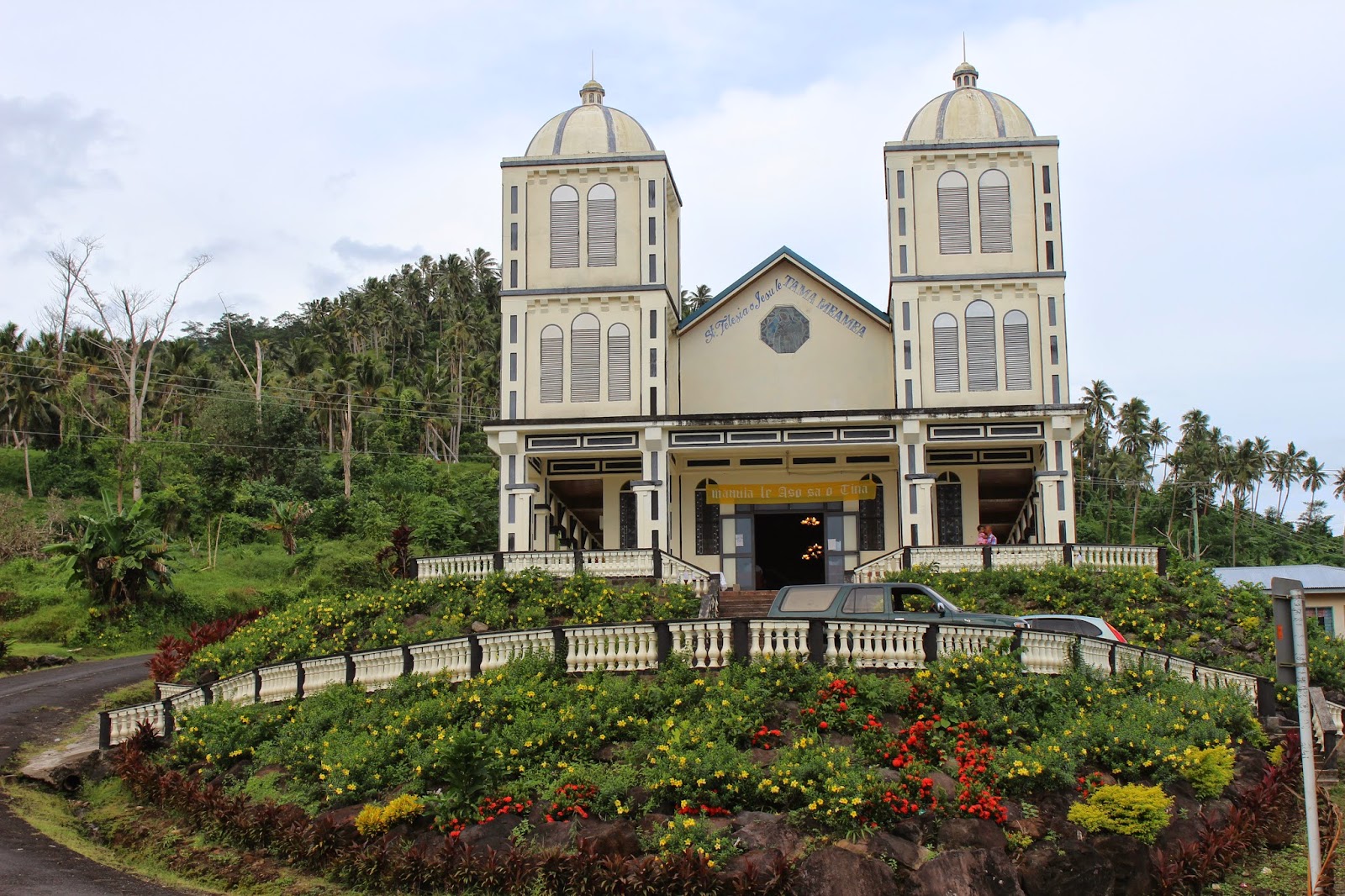 ... the main road around the island turned into this one-lane, pot-holed track.

Well, it's up to the Samoans how they choose to prioritise their spending. When we stopped in one village and heard magnificent choral singing coming through the dusk, we wondered who was happier - New Zealanders with our wealth and infrastructure, or Samoans with their family and religion.

But while it has exotic charms, Samoa also feels comfortable. English is widely spoken, the locals are wonderfully friendly and there are the strong ties to New Zealand. The local paper, for example, had news of the sex scandal involving a Samoan-New Zealand Shortland Street actress and lots on the Super 15.

Those ties were another reason why we went. Samoan is the third-most commonly spoken language in New Zealand and Samoan-New Zealanders, from Tana Umaga to Oscar Kightley, are an important part of this country's culture. It's good to get a feeling for where they come from.

Being only there for six days and biting off small chunks of it, not wanting to push the kids too far, we've only seen a little of what Samoa has to offer. We'll be back soon.

Labels: Travel in Australia and the Pacific

Why I will keep spending money on my children

On Facebook recently a few people have shared an article from the Telegraph about a woman's quest to not spend anything on her son for twelve months. In summary, the woman's goal was, for an entire year, not to spend money on kid-specific food, clothes, toys, activities, nappies or haircuts.  The shared article (and her blog entries) are then usually followed by comments by women noting how little they've bought their children and how often their children wear hand-me-downs. Or, how guilty they feel about the money that they do spend.

Now, as a disclaimer, I do agree that kids probably don't need half of what is bought for them, and that in theory it's wasteful to spend loads on clothes that are worn for a short period of time when they can be acquired second hand relatively easily. There are also loads of things to do with your children that are free, nature is the best playground and so on, and that landfills being filled with disposable nappies can't be a good thing.  According to my Facebook feed, I know some people who haven't bought anything for their children at all, and I know women who very rarely use disposable nappies. Good on them, I say.

But, after giving the issue some thought, I have very clearly decided that this path isn't for me and I will keep spending money on my children. Here's why:

I love lists. I really do. What's not to love? They're ordered, easy, and clear. I love lists so much I even added a 'Lists Glorious Lists' tag to this blog, which sits at the bottom of 27 posts. So, I was amused to read that, apparently, I have been the author of 'listicles', a growing trend among allegedly lazy bloggers and journalists. Some people, it turns out, really hate them. Of course this makes me want to stamp my feet and yell to the rooftops that I was writing listicles long before they became a 'thing'. Much like the 'selfie', which Tane and I have been taking for years before Kim Kardashian did the duckface.

Instead, though, I decided to write a list of 3 reasons why I will continue to blog using lists:
So there. I hope that the listicle haters out there are quivering in their boots at this small act of defiance.
Posted by MM at 9:41 am No comments:

In the movies, a road trip has young people, loud music, soul searching and shenanigans. Travelling with Amotai and Lily this holiday had all of those things. If by young people, you mean under three, and the loud music includes a singalong to 'Old MacDonald' whenever Amotai spots a cow. Soul searching of the 'where is the next good playground ?' variety occurs often, and shenanigans includes a naked swim in Lake Taupo (by a toddler). So, it's just like the movies, although the lake swimming scenes may be edited out so the rating doesn't creep to high.

Long car trips with children - this holiday involved about 25 hours of car time over 10 days - are a whole different kind of travel experience. First, we needed to take so much stuff, our poor little hatchback was bursting at the seams. Second, things take longer, once rest stops are built in. And most importantly, you can plan for every eventuality, but still end up breast feeding somewhere random by the side of the road or keep driving for much longer than your bladder wants you to as the kids are asleep and a toilet stop would inevitably wake them.