The most beautiful buildings on Earth

I don't know much about architecture, but one of the highlights of most trips for me is seeing the grand buildings. In Spain we saw two of the most famous and fantastic buildings in the world, the Alhambra and as Lauren blogged below, Sagrada Familia. For me they're up there with the Taj Mahal and Sacre Coeur in Paris as the most beautiful buildings in the world. 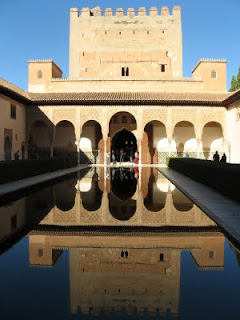 Part of the Alhambra
Granada's Alhambra was the last and greatest flourishing of Islamic architecture in Spain. Unlike the Mezquita in Cordoba, it has not been partly spoilt by an obscenely gaudy church plonked into the middle of it. It's jaw-droppingly detailed, but being Islamic the decorations are geometric rather than images of animals and people, so it does not seem as over-the-top as the interiors of many European churches and palaces. 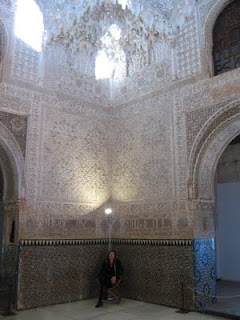 While the Alhambra has been around for more than half a millenium, the Sagrada Familia will not be finished for decades. But it is still one of the most stunning things I have ever seen. Normally a great building reminds you of others of the type you have seen, be it a Mughal palace, a Hindu temple or a Gothic cathedral. The Sagrada is like nothing I have ever seen before, and I can't say how much that impressed me. 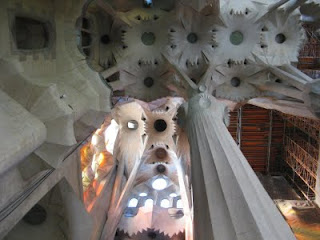 Gaudi was inspired by nature, so the Sagrada is all about curves and organic forms. It looks like it has grown out of a coral reef, or leaf litter. There are snail and lizards for gargoyles, pillars like tree trunks, steepletops like flowers. Go and see it. 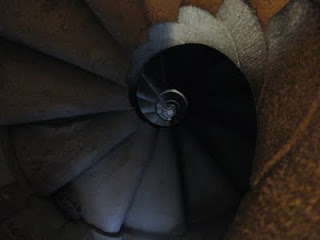 A stairwell in one of the Sagrada's towers.

Andalucia in Southern Spain is an amazing province. As discussed below, we went to Barcelona and I was whelmed. We then went to Valencia and was very relaxed, happy and full of paella, but still whelmed. When we arrived in Seville at the end of the week though I finally fell for Spain, and after visiting Cordoba and Granada as well I have decided Andalucia is probably my favourite region in Europe. 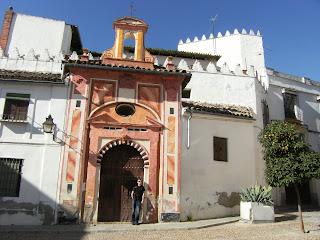 First, the tapas and paella are amazing. I also really love the Moorish architechture down here. We haven´t been to the Alhambra yet (although we did have a good look at the outside at sunset tonight) but the Mezquita in Cordoba and the Alcazar in Seville are fabulous. The Islamic influence offers a welcome change to the cherub overload suffered by the rest of Europe, and the buildings are spectacular. 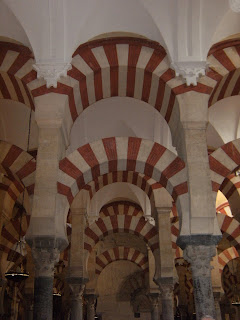 We have been especially lucky with our time in Andalucia as well as we´ve met interesting travellers, and learnt a lot about Spain. We´ve been given freee sangria, and have seen a local band performing flamenco music. We´ve also been given excellent recommendations for places to eat, and I´ve had ample chances to practice my very average Spanish. 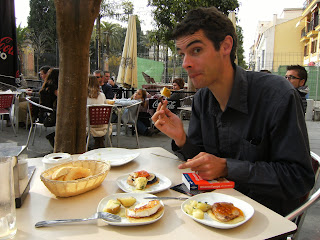 Mmmmm. Tapas. Made even nicer after using the old point and randomly select options method of ordering

I am already sad about leaving Andalucia in a few days time, which is saying something about how great it is here. Lucky we have one more month of travel to get over it, eh? ;)

As my sister Erin would say, La Sagrada Familia in Barcelona is super mega awesome. One wonders what went on in Gaudi´s head when he came up with the designs, but it is still amazing. It´s still under construction, and I can´t wait to see it when it´s finished. 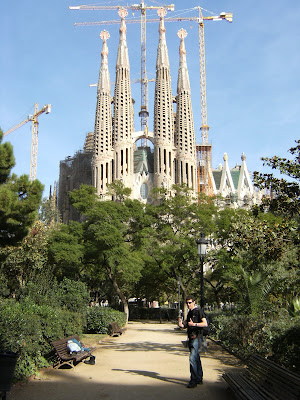 In general though I was not overwhelmed or underwhelmed by Barcelona, simply whelmed. I am not sure if that is a word, if not, it ought to be. Barcelona is a nice place, and I can´t even put a finger on why I didn´t love it as much as Rome or the Andalucian cities we are travelling around at present. The best I can come up with is that it doesn´t have the atmosphere of other places I´ve been recently. It is still worth a visit though, if not for the Sagrada Familia alone.
Posted by MM at 6:20 pm No comments:

There are ruins and then there are Pompeii and Herculaneum.
History geeks that we are, we have seen a lot of ruins in our travels. But the volcano-buried towns below Mt Vesuvius take the cake. Ephesus, Paestum, Pergamon, Angkor, Luxor, Karnak, the Forum and the other ruins of Rome are all superb, but Pompeii and Herculaneum take it to another level. 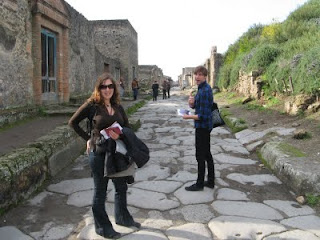 Lauren and Stephen in Pompeii

With other ruins, almost always what you see are the big religious, military, cultural or political buildings - the likes of your Pyramids, baths, theatres, temples, palaces and castles. They´re splendid, but they don´t give you much of an insight into Joe Ancient´s everyday life. After all, what´s more likely to survive down the ages - Westminster Abbey or your flat? P & H were drowned in ash and mud respectively, so they were in a way frozen in time. Everyday life is there to see, from the ´pubs´ with their holes for amphoras of wine, to the ´beware of the dog´ mosaic in the doorway, to the frescoes on the walls. The pyroclastic flow that covered Herculaneum even partially preserved wood, bones and food. 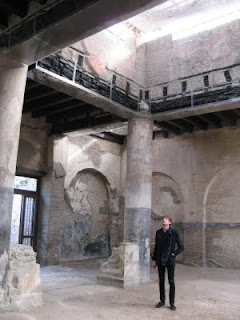 Stephen in a building in Herculaneum. Note the 2000 year old charred beams.
Lauren, Stephen and I had a great time wandering around both towns, poking our heads in the doorways and bedrooms of 2000 year old houses, walking the cobbled streets with their cart ruts, doing silly jumping photos in the forum. 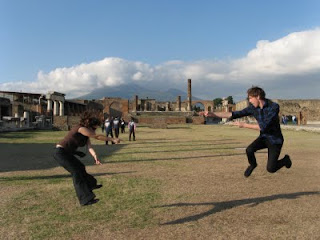 But every now and then we would get a reminder that a vast and terrible tragedy happened there. One house in Herculaneum is full of skeletons. In Pompeii the bones are gone, but the hollows left by the bodies remained to be filled in by plaster. Stilled in the moment of death, they are chilling. 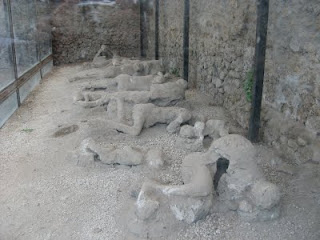 This one's for Bill and Jack

Like many New Zealanders, my grandparents´ generation was the one that lived through the Second World War. My grandad Jack drove trucks in the Pacific and died with shrapnel from a Japanese shell still in his leg, while my great-uncle Bill served in Italy, including during the prolonged, brutal battle of Monte Cassino. On the way south from Rome we visited the town.

Cassino was a key point on the road to Rome and during the battle for it 45,000 Allied troops and many Germans were killed, and most infamously, the historic hilltop monastery (founded in the 6th Century AD) was bombed into rubble by Allied bombing.

Today there´s little to remind you of the devastation. The town has been rebuilt as nondescript apartment blocks, while the new monastery again sits atop its steep, strategic peak. It´s part of the lovely backdrop to the town, along with the Appiennes rising in the near distance, the higher peaks covered in snow.

The town´s museum was closed for the winter and we didn´t time it right to take a bus up to the monastery, but the Commonwealth War Cemetary was open. 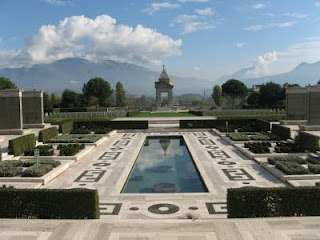 In this sublimely peaceful place are some 4000 graves, each with its words and symbols. There are crosses, Stars of David, verses from the Koran in Arabic, Hindu scriptures. There are the many emblems of the British regiments, the crossed knives of the Gurkhas, the maple leaves of the Canadians, the Springboks of the South Africans, even a solitary star for one of the Soviet Red Army. And row after row, more than 400 silver ferns. 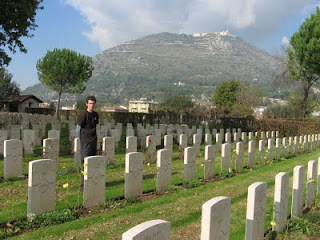 In the New Zealand section, with Monte Cassino in the background.
There were two other visitors to the cemetary, an elderly woman wearing a poppy and her son. It was Remembrance Day in the UK and they were there to lay a wreath on a British grave. The ring of poppies was marked with a poem and a note with one word: Dad. He was 28. She probably barely knew him.

Grandad Jack died when I was too young to talk to him about the war, though I have his medals and memories of playing darts in the garage with he and my father. Uncle Bill I met once, on a trip to the South Island with Dad. He shared some war stories with us. I remember one about a little Italian girl raped and murdered by some Algerians fighting with the Allies, and another about Bill taking a body out of a tank. The man had popped his head out the top and a shell had taken it clean off, the heat sealing the wound.

Bill is gone now too. In the cemetary, surrounded by the graves on a beautiful autumn day, I thought about Bill and Jack and the others who went to war. This entry is for them. 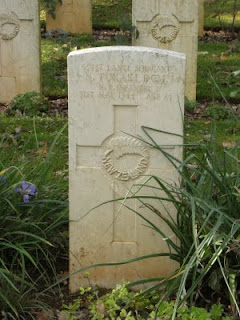 Ah, Rome. This is my second visit here and about Lauren's fourth, and we have decided that is (against a lot of tough competition) our favourite place to be tourists in. We don´t count London, as somewhere you have lived is different. You don´t think of things like a tourist. You value things like parks, supermarkets and movie theatres a lot more, for a start.

We were thinking about how to rank cities as places to visit. For us, it comes down to five things.

1. Coolness of sights
St Peters. The Vatican Museum. The Forum. The Pantheon. Some of the most amazing buildings, ruins and museums in the world are here. Including this little feat of engineering: 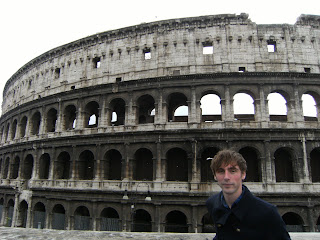 Stephen at the Colloseum
2. Range and number of things to do and see
After two years in London, in which we saw something every weekend we were in the city, there's still a few things I've not seen that I'd like to. Rome's like that. There are more wonderful churches and fountains than you can shake a stick at, and you can't walk without falling over a Roman ruin. Our Western Europe Lonely Planet doesn't even mention the huge city walls, or the aqueducts running through and far beyond the city, or the extraordinary Theatre of Marcellus. These would be among the must-see sights of most cities. 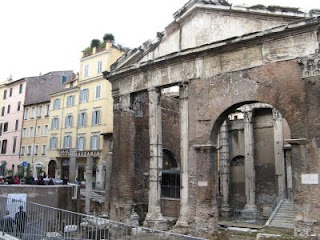 Part of the Theatre of Marcellus complex.
3. Atmosphere
That X factor. The vibe, the feeling in the air, the people. Glasgow on a Saturday night, Paris in the spring. Rome, with its piazzas, rust-red apartments and gelataries, has atmosphere in spades. It´s a mix of chic, chaotic, historic and modern.

4. Transport
Boring but important. Rome´s public transport is only okay, but the beauty of the city is that almost all of the major sights are in a very walkable area from Piazza del Populo in the north, to the Vatican City in the west, to Termini in the east, to the Circus Maximus in the south. Pretty much the only time we left this was to see some fascinating catacombs just south of the city where the early Christians secretly buried their dead. 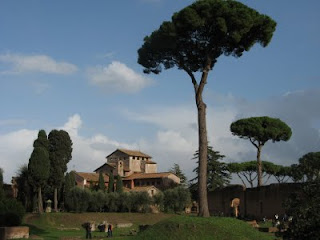 The Palatine Hill, where the emperors has their palaces.
5. The food
It´s Italy. Pizza. Pasta. Gelato. Salads. A hundred tasty deserts. Enough said. 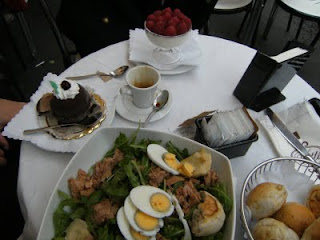 of course, other people would have different ways of rating a place. Nightlife or shopping, say. But what about you? What´s your favourite city to be a tourist in?
Posted by Tane at 7:03 am No comments: