Tane and I have now been hitched for three years. Being hitched for three years is a strange length of time - long enough to be well settled and not to giggle anymore about saying "husband" or "wife". On the other hand, though, it's not really long enough that we look any different from our wedding photos. Unlike our last two anniversaries, we were unable to jet off to Paris or Washington D.C. Being in Wellington was lovely, though, as we have settled very nicely to life back in New Zealand and a nice meal out to celebrate three years of married life was just as good as going on trips for the past two. 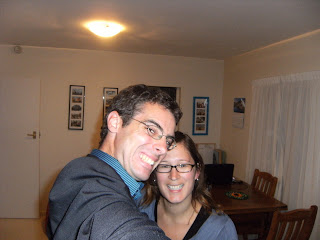 Three years
Posted by MM at 6:52 am No comments: