Turkey vs Bulgaria - with pictures! 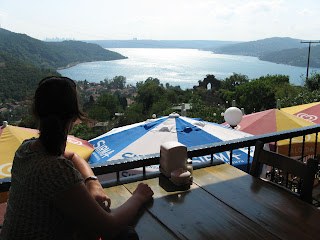 Great service, great view. Having a drink overlooking the Bosphorous

2. In Turkey, locals go out of their way to help you. In Bulgaria, we really had to go out of our way to find help. 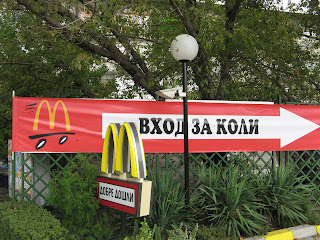 Although, the way to McDonalds was well marked in Plovdiv ...

3. Turkey, especially Canakkale (our current location) is filled with monuments and reminders of World War One. In Bulgaria, street sellers sell genuine Nazi antiques and brooches. Including a very creepy SS knife. Shudder. 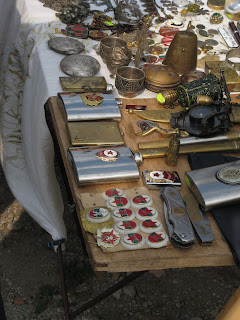 Nazi and Soviet memorabilia in a small Bulgarian village. We couldn't decide - is it OK to buy this stuff or plain dodgy? Would YOU want to own a genuine SS hip flask? 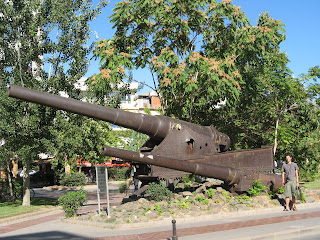 Tane and a WWI cannon in Canakkale, Turkey.

4. In Turkey, we are given cake and juice while travelling on buses. In Bulgaria, we are asked for bribes from the conductor so he can give us something that we had already paid for.
.
5. In Bulgaria, we were warned against the police, gypsies, getting gassed to enable theives to steal our things while on the night train, not to mention getting killed while on the night train. In Turkey, we were warned against going to Bulgaria.
.
Yes, Tane and I are back in Turkey and loving it. Don't get me wrong, we don't regret going to Bulgaria and had some very fun times there. However, leaving was a real drama. First, no-one wanted to tell us how to buy tickets. The woman in the train ticket office pointed us to wait at an empty desk for information while she ignored us and ate her lunch. We had been ignored earlier that morning at the info centre by two woman counting postcards. The train we eventually booked was four hours late, and while waiting we were huddled in a small space with a creepy drunk who smelt like a public toilet and a drug addict who ignored the non-smoking sign. When the train arrived, after boarding we were asked for a bribe to get a private carriage at one in the morning by a ticket conductor clearly taking advantage of weary travellers. So, Tane and I both love Turkey even more now than before. Yay!
.
As we are staying a tiny distance from Galipolli (which is just as important to the Turks as it is to us), Canakkale is filled with reminders of the First World War, as well as having an excellent military museum. Canakkale is also near Troy, and the makers of the 2004 movie even donated the horse they used to the town. Even without going to Bulgaria first, this place would have been neat. Now it's a real pleasure. 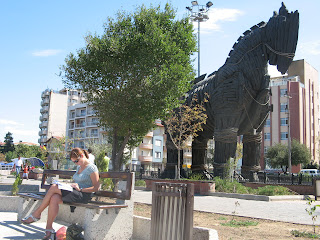 I would not have been reading by the horse if Eric Bana and Brad Pitt were also gifted with it
Posted by MM at 3:06 pm

Labels: Travel in Eastern Europe, Travel in the Middle East

yes yes yes! agree 100%. was very nice meeting you guys! have fun on the rest of your honeymoon :)

thetoakleys.blogspot.com for some of our nonsensical travel ramblings

Right! You just convinced me never to go to Bulgaria! :-P

I am so glad you agree with us Helen given that you guys have seen both Turkey and Bulgaria too. I was starting to feel a little mean about what I said before!

I've just been reading Birds Without Wings about Cannukale and Gallipoli. I had to skip several pages of descriptions about corpse flies...

I'm Bulgarian, therefore I can assure you I've seen all those things you're rambling about. Truth is, it takes a different kind of person to like this country. Maybe someone who knows a little more about history and the places to go to when in Bulgaria. As for the military memorabilia - that's extremely hilarious and childish in my opinion - there are thousands of people all over the world who adore military objects and symbols. It's a good thing one from the west can get them rather cheaply here. Just because you two are living in a John Lennon song doesn't mean we all should.
Also, why not include some pictures from Bulgaria?