Last week, Tane and I decided to go to Greece, a decision based on both of us having read Captain Correlli's Mandolin while in Laos. That, and the fact that the Greek Island Kos was so close to Turkey it seemed a pity not to go for a while. 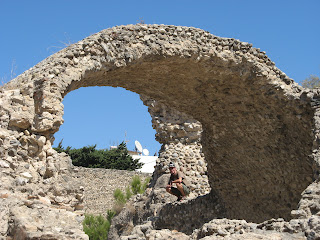 Yay! Greek ruins in Greece! As well as satellite dishes used by the ancients ... Ruins seem so common we actually found these ones by accident and they were totally unmarked. Crazy.

Given that Greece is only an hour away from Turkey by ferry, I was surprised by how different than Turkey Kos was. For one, it was much more expensive. There were lots of other dıfferences - blue and white are the colours that are clearly the new black, scooters are everywhere and a highlight of the visit was seeing a little old Greek lady sitting reverently in her house under a painting of Jesus. Greece, though, surprised me as it is so much more European than Turkey. I know this is a statement that will make you roll your eyes. 'Duh, Lauren' I can hear you crying out while reaching for your rubber hand for slapping. 'The fact it is in Europe might have something to do with that'.
Turkey has a real Middle Eastern feel with the regular calls to prayer, multiple mosques, and waiters hungrily oggling our food because most Turks are currently adhering to the Islamic holy month Ramadan. I think that without realising it, I had expected some of that flavour to rub off on Kos. Afterall, Turkey is filled with reminders that Greece is so close - ruins, mosques that were converted from orthodox churches. Tomorrow we are even planning on visiting a town that has been largely abondoned since the Greeks left during a population exchange after WWI. But, in Kos there is no hint of this shared history at all - the only common denomonator between the two places seemed to be the hordes of sunburnt tourists. And the glorious sun, of course. 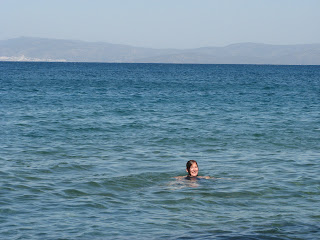 Swimming in the sweet sweet Greek sun
I really enjoyed my first taste of Greece and hope to see more of the Greek Islands some time in the future. At the moment, though, I am happy that we decided to spend the bulk of our time in Turkey. I think that's because I love the fact that I hear the call to prayer and have learnt a lot about Islam while being yet another sunburnt tourist. Which, incidentally, I am. My tan marks are almost obscene. 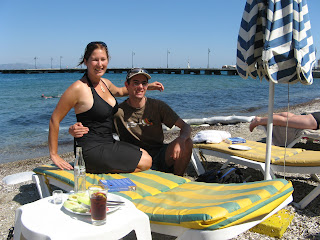 Us at the beach. Note the blue and white flag - I think the Greeks are scared we will forget their national colours.

NB: Tane didn't enjoy Greece as much as I did on account of his drinking too much Zorba beer and eating too much fine Greek food. He spent most of our time there wanting to sleep. He wasn't grinning after drinking that beer. Lucky we didn't crack out the ouzo

I hope you had a salad or a gyros there. They're two things I'd love to bring back home.