The last week in Turkey has been so fabulous, if I described it in detail you would just want to get a giant rubber hand and slap me a few times for excessive bragging. The last week has been fılled with games of checkers by the beach, roof top meals and 1960s and 1970s themed karaoke. 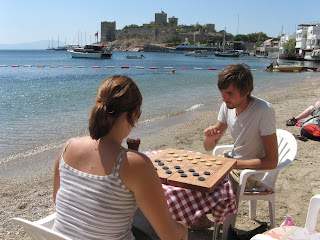 The beach in Bodrum. Good times. Until I lost.

There have also been ruins galore. To some, ruins are boring. To others, they are only to be appreciated with solemn 'ooooh' and 'aaaaahs' at appropriate intervals, as well as quiet and subdued reverence for the ancients who walked around the ruins in times long passed. Tane and I, along with Stephen and Erica were in the latter category. Mostly. 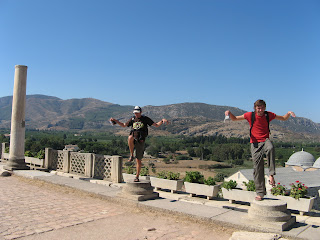 Stephen at the St John Basilica in Selcuk. Apparently, the real St John wrote the book of Revelation here. I guess he left out his predictions regarding strange men in the crane stance when predicting what tragedy will befall the world. 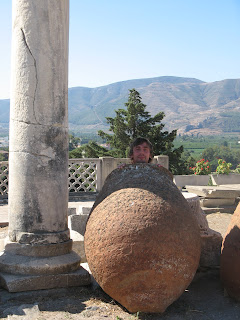 Not to mention the strange cone man. That would certainly scare me.
The highlıght, though, has been the great Ye Olde Ampıtheatre Challenge of '07. The ampıtheatre at Ephesus seats 25,000 people and is a sight to behold. To honour the ancıent Romans, we did what they surely would have done back in the day. I mean, why would you build such a huge ampıtheatre and NOT race to the top? It would have been rude for us not to revıve the ancıent tradıtıon. So we dıd. Erica was the cheerleader, while Stephen, Tane and I raced to be the person that did not have to buy a round that evening. 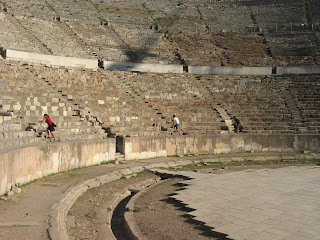 Ready steady go! I had no ıdea my legs would burn so much ... 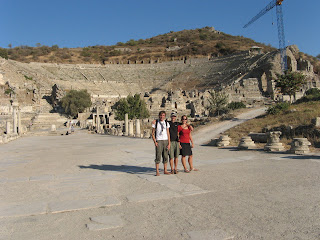 Afterward, in front of the ampıtheatre
Of course, I lost. The boys tell me that the beers - aptly named Efes Beer after a challenge taking place ın Efes - tasted good. Like victory, apparently. 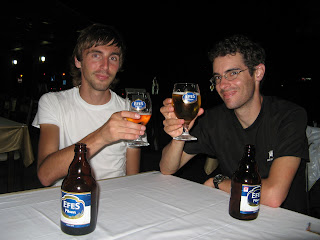 The last week has been great. Ruins certainly get a big thumbs up from us. While I am getting sıck of museums, ruıns are still choıce. 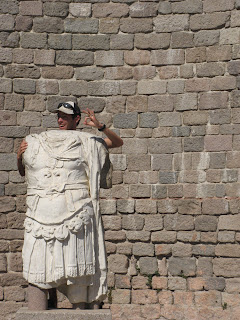 Labels: Travel in the Middle East

'Tane at Pergama'..this is a damn funny foto..