Today I completed my first half-marathon. It was a lovely scenic run through one of the prettiest parts of London, passing Buckingham Palace, Big Ben, Temple, Trafalgar Square, and most importantly, my work. Even later in the run when I felt like I had found myself in some cruel alternative reality where time stands still and all you can do is run, I was able to appreciate the loveliness of Hyde Park in autumn. 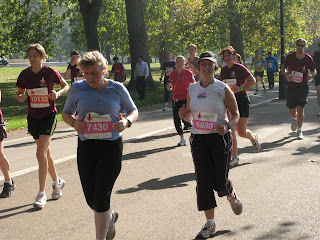 A do run run run ...
The Half was put on by the Royal Parks Foundation and had something like 12,000 participants ,which was fabulous - lots of participants means lots of supporters, and lots of supporters means a massive crowd that I was too ashamed to walk in front of, so I was able to push that little bit harder. I put more than what I had into crossing the finish line and as soon as I did my body totally gave up and Tane claims I was staggering like a drunkard. In fact, I was approached by this kind official who wanted to make sure I was OK. 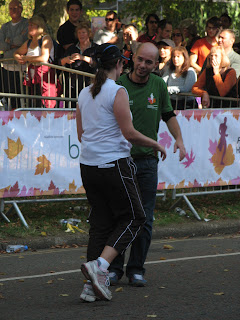 In spite of that, the blood blisters on my toes and the feeling that I will never walk like a normal person again, I loved it. A few of us are enrolled in a second half marathon in Bath next March, and I am looking forward to beating my time and crossing the finish line looking like someone that has finished a crate day rather than run 21 km!
Posted by MM at 6:35 pm

Labels: In London Town, Something physical

Congrats for doing your first half...and I'm impressed you're already planning your second one! :o)