Thanks to her Norman History paper and freakish knowledge of dates, Lauren remembered about the battle last Friday, and decided to see what Google could tell us about how the British mark one of the most important dates in their history.

Turns out they commemorate it in some style. Hundreds of medieval enthusiasts from England, Wales, France and Italy gather to dress up and spend the weekend recreating the battle on the site - which is at a town called Battle, funnily enough. 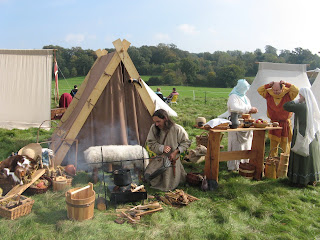 There's more to recreating a fight than just whacking people with swords - the recreators went the whole hog and brought tents, cook fires, etc.
Incidentally, Battle might beat even Bulls (unforgettabull, dependabull, etc) for best use of cheesy puns on the town's name. Where else would you find the cafe Taste of Battle, or Battle Stationers.

The weather was gorgeous and there was a great festival atmosphere, with medieval knick-knacks, craftwork and ironmongery for sale, hordes of visitors, archery and falconry displays, storytelling and historical exhibits. Lauren, Lucy, Renee and I wandered around then brought some overpriced fatty food and sat down to watch the main event. 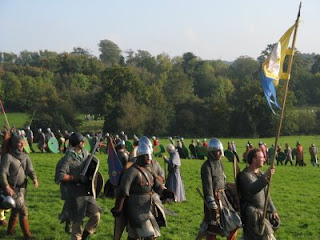 Hooray, it's Team Saxons!
The battle, which lasted for something like an hour, was brilliant. There were bannermen and women, priests, knights, archers, hundreds of footsoldiers armoured in chain mail and a commentator to keep us up to date with what was going on, as well as lead the cheering.

Proving that the British (and Kiwis) love a gallant loser, everyone cheered for the Saxons and booed the Normans. Apparently the Saxons chanted "oot, oot, oot" at their enemies - we all joined in, doing our best Canadian accents. 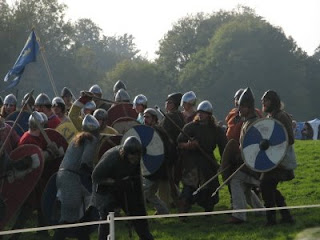 The din of mock battle. 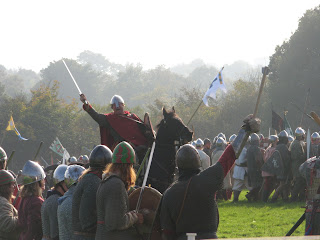 The dastardly William the Conqueror leads his men to victory. He was probably Australian. 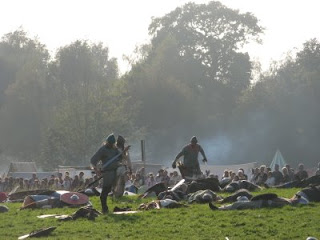 Heard of it? I've got the commemorative teatowel!