World-class tourism in your own backyard

A little while ago Lauren and I read this travel article. In it the author of the very popular book '1000 Places to See Before You Die' narrows her list down to just 10. On the list is Fiordland. Now, when someone who's done as much travel as Patricia Schultz has ranks somewhere in your country in the top 10, that's a pretty damn fine recommendation.

After reading this Lauren and I felt a bit sheepish. She's never been to Fiordland and I've only spent a few days (walking the wonderful Kepler Track and heading to Milford Sound, but not going out on the water) back during the epic South Island road trip of 2000 with Miikka, Ulf and Erin. So we decided that our first nuclear family holiday would be a trip to Queenstown and Te Anau.

Things got off to a bad start, with our flight to Queenstown being cancelled due to Air New Zealand having to ground a number of jets for safety reasons. We even got on interviewed on tv about it. Sadly, all they got of Amotai was the top of his head.

Air New Zealand booked us on a flight the next day and let us come back a day later, so aside from losing a night's accommodation, we weren't badly affected. What was more annoying was the six hour wait in Christchurch airport the next day, after yet another plane got grounded and another was delayed. Christchurch airport is quite nice, but not six hours nice.  Still, as we flew in Queenstown the clouds lifted, the Remarkables looked remarkable indeed and the 'we're on holiday somewhere cool, wooooohooooo!' feeling kicked in.

The south of the South Island has had the pick of the weather this summer and our visit was no exception. Day one in Te Anau was lovely.

Day two, when we headed off to Milford Sound, was even better. Once the Lake Te Anau mist lifted, there was not a cloud in the sky as we drove north. It really is one of the world's most scenic journeys. I think I'll let the pictures do the talking. 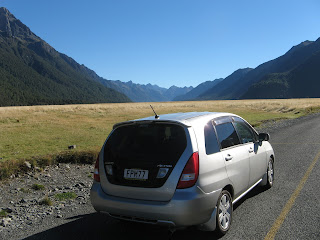 Milford Sound really is worth the hype. It's a tourist magnet, but such is its scale and majesty, it effortlessly swallows up the crowds. Lauren and I both agreed that it and the drive there makes our top 10 lists of places to visit.* New Zealanders, you must visit it.

* Lauren: Milford Sound (and drive there), Halong Bay (Vietnam), London, Rome, The Great Wall, the Taj Mahal, Turkey, The Mall (Washington DC), the Sahara, the Valley of the Kings (Egypt)
* Tane: the same, except for Paris, Luxor (Egypt) and Angkor replacing the last three.