The Other Boleyn Girl and historical accuracy

A couple of days ago, Tane and I went to see the movie The Other Boleyn Girl. I had read the Philippa Gregory novel about five years ago and had loved it. The true story of Anne Boleyn and her sister Mary has it all - intrigue, incest (or allegations of), a King with too much testosterone and not enough scruples, one sister who became his mistress and had his illegitimate son, and a second that became his wife and lost her head. The story of Henry VIII is so filled with scandal, death and bodice-ripping, if it wasn't such a well documented part of English history is would be very easy to dismiss as legend. 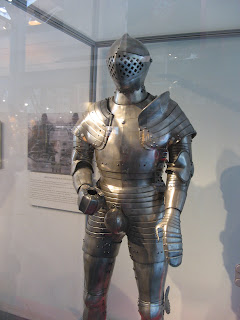 After having seen Henry VIII's armour at Greenwich last year I have little doubt that a man that would wear this might also be the sort of man that would create a new church in order that he could marry the sister of his mistress
Philippa Gregory is onto a winning formula with her series portraying the Tudors in a fictional context. While Gregory took liberties in the book based on Mary Boleyn's life insomuch as she gave the characters life, from what I have read it appears she is fairly historically accurate in her portrayal of events. There is the odd turn of phrase used that doesn't sound like something from the 1520s and 30s , but apart from that I thought it was an excellent book. Historical fiction is always a tricky genre to write in, and very few books get it right to the satisfaction of people who know the period written about, or at least flatter themselves that they do. This isn't unique to Gregory's books, even some Booker winners get it wrong: Schindler's Ark took great liberties when writing about Oskar Schindler, and Oscar and Lucinda talks about coat hangers before they were invented. Not that I really care in either case.

Sometimes I hate historical inaccuracy, sometimes I don't. There is no hard and fast rule about it - for me it often depends on how the inaccuracy is presented, and how good the rest of the book is. As a rule I find that I can overlook details, but not historically inaccurate ideas - especially books where the hero or heroine from days gone has modern ideas about gender, race and class when the bad guys don't. My other pet peeve is what I can only describe as Titanic syndrome - the way almost every single modern book written about either the USA or UK that touches 1912 has at least one character die on the Titanic. That's just me though, and I don't claim to be consistent or rational in what bugs me and what doesn't. 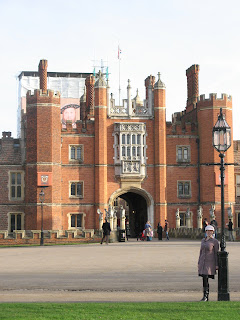 At Henry's palace Hampton Court earlier in the year. Hampton Court is fabulous, a maze of coridoors and badly lit rooms perfect for scandal and intrige.
Before going to the movie I had read a review of it in the Guardian by a man who had enjoyed the movie, but criticised it for being historically inaccurate. The only concrete pieces of "inaccuracy" he wrote about was Anne Boleyn's necklace looking like something from the 1980s and the fact that Eric Bana who plays Henry is not fat. The reviewer has obviously not seen Anne's portrait in the National Portrait Gallery wearing the necklace, nor done his research about what Henry looked like earlier in his life. Nevertheless, I did go to the movie wondering what it would be like. 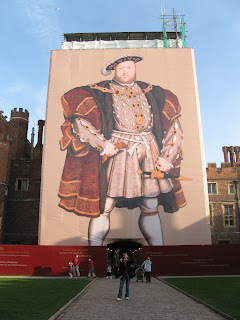 According to an exhibit here on younger Henry, he may have looked like Eric Bana when he was young. That's certainly a much nicer mental image than this one ...
I liked the movie The Other Boleyn Girl in the end. While it was a bit cheesy in places and the dialogue a bit stilted, there were some great scenes in it and I was moved by the ending in spite of knowing that it was coming. And even if it was historically inaccurate in places, I didn't care as I was too busy enjoying the movie to notice. It wasn't as good as the book, but still did a pretty good job of putting Philippa Gregory's interpretation of events onto the big screen.

I wonder what other people think though - did you prefer the movie or the book? Does historical inaccuracy bug you in books? What about movies? 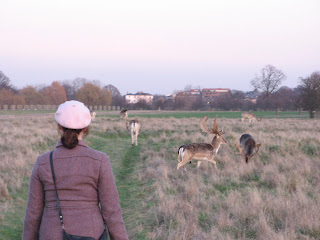 Deer at Hampton Court. Apparently Henry liked to collect antlers as well as wives.
Posted by MM at 9:07 pm